WestTalks – In Conversation with Luke Carman 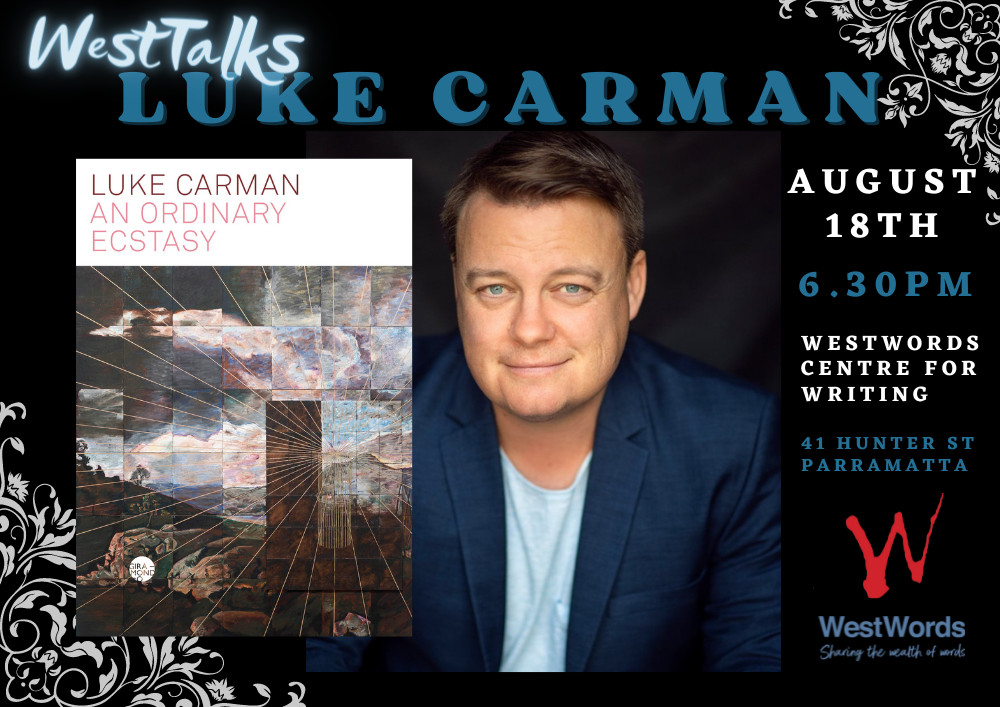 Join us for our August installment of WestTalks, as we speak to Luke Carman on the release of his new work: An Ordinary Ecstasy. In stories of desire, grief, and exaltation, the collection reflects, as its title suggests, on life at its most ordinarily ecstatic – life, in other words, such as it is.

When: 18 August, 6.30pm
Where: WestWords Centre for Writing, 41 Hunter St, Parramatta
This is a free event. RSVP here.

An Ordinary Ecstasy contains seven short stories, all of which explore the lives of people whose days are marked by anxiety, tenderness and exaltation. These stories were written in our recent time of isolation, when Carman would wander the evening streets alone. As he writes in his author note: ‘When I looked at the silent unit-blocks and the empty sundowner-shacks around me on the walks, all I could hear was the imaginary voices of the people who would be around me a time more ordinary. In the end, I was so assailed by the chattering cavalcade of strangers, that I lay awake at night, after my walks, with their murmurs becoming an obsessive constancy of oratory…With these new works of fiction, I have tried to exorcise myself of the above possession by bringing this unsolicited heteroglossia to the page.’

Luke Carman is an Australian fiction writer, essayist and academic. He is known for his collection of semi-autobiographical stories, An Elegant Young Man. The stories are set in Liverpool, Australia, a suburb outside Sydney. He has been called a post-grunge lit writer, a reference to an Australian literary genre from the 2000s which emerged following the 1990s grunge lit genre. His first book, An Elegant Young Man, won the NSW Premier’s Literary Award for New Writing. The book is a collection of inter-linked, semi-autobiographical short stories. Intimate Antipathies, a collection of Luke’s essays on the ordinary madness of the writing life, was published in July 2019 by Giramondo.