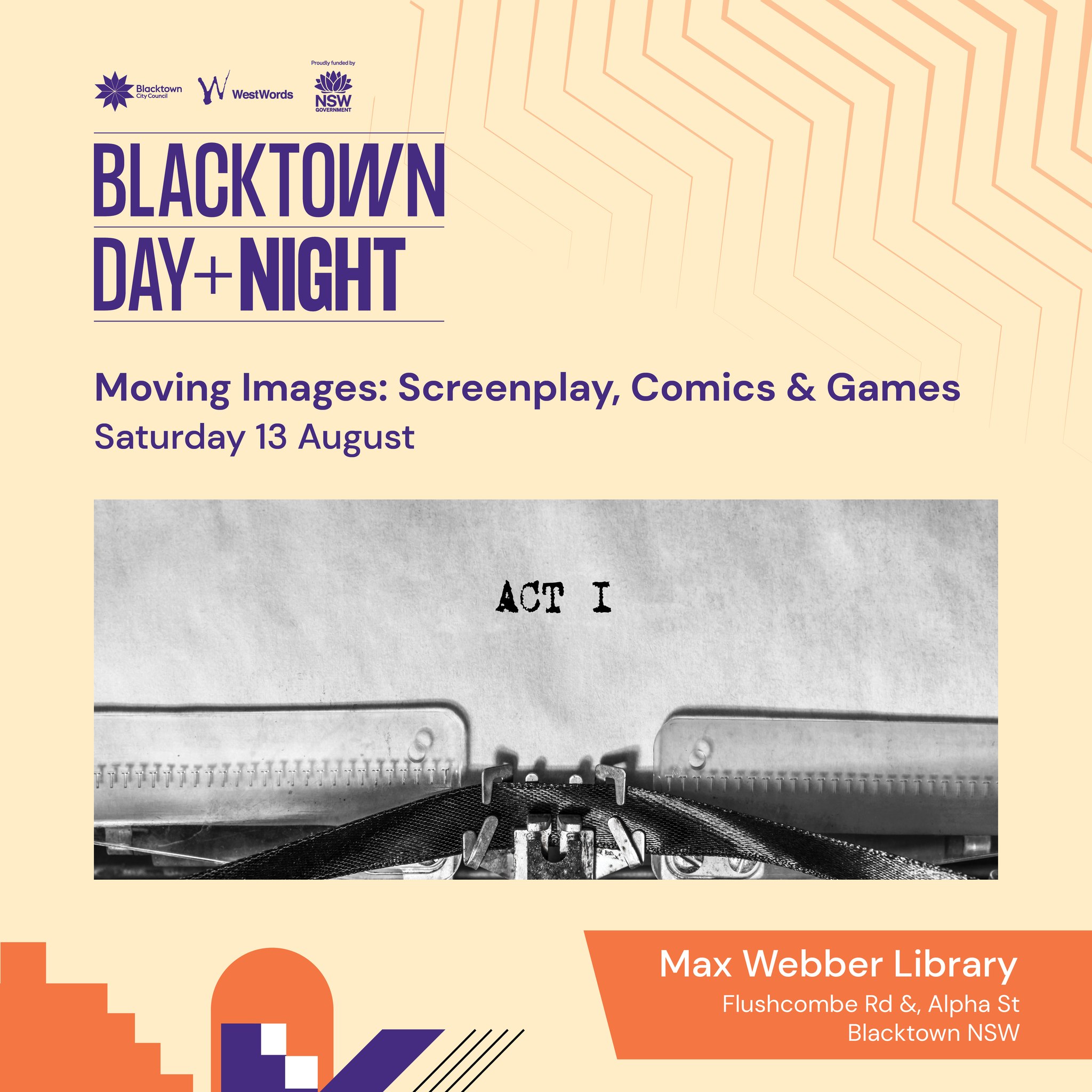 Saturday 13 August – Moving Images: Screenplay, Comics & Games
Join us to celebrate the different ways we consume story – from the screen, to comics, to games – and how speculative fiction is a genre that has come to exemplify the plasticity of storytelling.
RSVP here

11.00 am – 12.00 pm
Writing Metamorphosis – Writing for Screen, Comics and Games
Join a packed panel hosted by David A. Quinn as three industry writers share insights into their craft – including writing for screen, animation, games and comics – as they compare experiences on how the writing process transforms across different media. Featuring Richard de Carvalho (Blaster in the Right Hands), Ally Burnham (Metropius) and Nikolai Goundry!

1.30 pm – 3.00 pm
Workshop: Writing for Screen
Join us for 90 minute workshop, which will lead you through the ins- and-outs of crafting a story for the screen, hosted by Erik Magnusson.
RSVP here

1.30 pm – 3.00 pm
Workshop: Writing for Comics
Join us for 90 minute workshop, which will lead you through the ins-and-outs of crafting a story for the comic book page, with Louie Joyce.
RSVP here

Tim McEwen is a comic book creator, storyboard artist, cartoonist, designer and educator, having comics published since the mid-1980s. He has championed Australian comic books since the 1990s as a distributor, publisher, event organiser, commentator, reviewer, advocate and more, including re-establishing the Ledger Awards for excellence in Australian comics in 2014. Tim has been nominated and shortlisted many times for numerous awards, including three times for Best Comic Book Artist in the Australian Cartoonists’ Association’s prestigious Stanley Awards. In 2018 he received the Platinum Ledger Award for contributions to the Australian comics scene. He has taught comics creation, history and theory at university, primary and secondary schools, privately and in workshops, and is currently teaching at JMC Academy Sydney, concentrating on visual storytelling and drawing subjects.

An award-winning filmmaker, Richard de Carvalho has worked across various areas in the entertainment industry with over ten years of film and design experience. Richard wrote, directed and puppeteered, Lenny (2019) – a short romantic comedy that was notably shortlisted at Tropfest 2019, nominated for Best Film at the 2019 Heart Of Gold International Film Festival, and nominated for 4 awards at the 2020 Melbourne Indie Film Festival.

Nikolai Goundry is a Sydney-based assistant producer, game designer and writer focused on a holistic approach to game design where narrative, systems and mechanics are all well balanced. He graduated with an Advanced Diploma of Games Design and Production at the Academy of Interactive Entertainment in 2016 as Most Outstanding Game Designer for skill, knowledge and teamwork in a game development environment at AIE 2016.

David “Quinny” Quinn is a performer, writer and artist who has appeared for nearly fifteen years as a host for Supanova, SMASH, Madfest, Gamma-Con, Haven Expo and more! He’s also a long time film critic, both solo and with The Periodic Table of Awesome!

Erik Magnusson – Erik is a Sydney-based writer with extensive experience in a range of departments across the media landscape. His portfolio of written work which includes web series’ and short films that have garnered acclaim from international film festivals.

Louie Joyce is an award-winning comics creator and illustrator based in Wollongong, Australia. His comics include Haphaven (Winner of a 2020 Silver Ledger Award, Shortlisted for the 2019 Aurealis Awards, Best Graphic Novel, Published by Lion Forge), Past the Last Mountain (Winner of a 2017 Silver Ledger Award), Astral, A Life in The City and self published books MISHMASH & HODGEPODGE. Louie’s illustration work has been exhibited internationally and he works with a wide range of clients creating illustrations for storyboards, animation, publishing and concept development.